As I wrote in part 2 of these series of articles about Grammatical Gender, this one will be about words ending in -ÃO! They are tricky because some are masculine and some are feminine. So here I’ll show you a way to *help* you separate them.

As I wrote, just to help you because there are some exceptions, too. First, I’ll put here an explanation that will be important for you to identify feminine and masculine words ending in -ÃO.

Concrete noun is something that can be touched, seen, heard (perceived with one of the five senses). When you think about a concrete noun, you have the image of a thing in your mind, something that belongs to the reality, like a table, a chair, the sound of a truck.

Abstract noun can’t be touched or seen, they are feelings, emotions, ideas. Some examples: love, peace, education. Now you’ll see why these definitions are important. 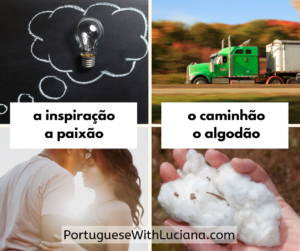 In this part, we can add concrete nouns! Let’s use caminhão (truck, lorry) as an example. It’s something that can be touched, seen, heard, and even smelled! It’s a concrete noun and masculine in Portuguese.

And here, as you guessed, we can add the abstract nouns! For example, the word emoção. This is not something you touch or see, but you feel it, it’s normally hard to describe, people may express different ideas about it. So it’s feminine!

Other examples: a compreensão, a inspiração, a satisfação, a razão.

This was too easy, right? Let’s add some exceptions (exceção – feminino) here:

As you see, there are exceptions, but you can use the rules in 1 and 2 to guide you when you are learning them and I’m sure you’ll get more right that wrong ones!

From the first part:

From the second part:

Here you have an activity to practice what you’ve learned in this article!

Hope you got all right and if you want more practice, click here!

Any questions about this subject, let me know in the comments!

How to conjugate irregular -IR verbs in Portuguese

Learn how to use the word MUITO in Portuguese